Movies are not a big part of my life. Except for the few that have changed it.

Braveheart is one of those and a few weeks ago it took on a whole new meaning when I got to meet Mel Gibson in person. 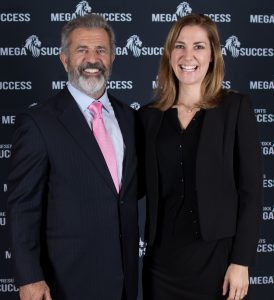 As fascinating as this meeting was because of Gibson’s electric personality, there was also so much to learn. Not only from Braveheart, but also from Gibson himself, who, on a closer look, has a lot in common with William Wallace, the character he played.

Braveheart is a stirring movie, though historically dubious. The lead character, Braveheart, William Wallace, represents the hero who unites the country to fight for freedom from English tyranny. While not the formal leader of the same, Wallace is the one who unites the troops behind him, more so than the noble leadership could. His strength comes out of the razor-sharp focus of his vision, his unwavering belief in success and his uncompromised determination to move mountains.

The awe-inspiring magnetism of his rebel leadership role, along with his integrity and strong principles have kept me wondering over “elected leaders” versus “selected leaders”, who they are and what makes them, for a long time.

His famous quote “Men don’t follow titles, they follow courage” has stayed a mantra in my life. To achieve success, you must lead from the front, with a clear vision, courage and without compromising on your own principles.

If you haven’t watched Braveheart by now, I hope it’s on your list for tonight!

While the movie had made a strong impact on me when I first watched it, it certainly does not compare to the encounter with the man who produced and played it, Mel Gibson.

“Risk is kinda fun for me”

Many would ask a personality like Mel Gibson what he attributes his success to. But I think you really don’t need to. He is giving you the answer when you listen to his stories. “Risk was always kinda fun for me” he would say. “I operate on gut feeling mostly .. There is a little bit of intelligence involved. But not much…” he ads chuckling. In the little time we spent, this made me feel like I had known this man all my life. An aura of joy, modesty and self-deprecating humor surrounded him like a shield that was created against the kind of attacks probably all A-list celebrities have to battle. In a few minutes, Mel can transcend his secret of taking risks to inspire everyone around him.

If you want to succeed more you need to fail more, and Mel Gibson seems to have mastered that just like William Wallace in Braveheart. 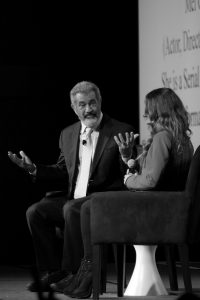 Taking risks sounds scary enough for most of us not to do it. And even if we intellectually understand the need to take more risks, we often end up retreating to the safety of our comfort zones when we sense danger. When you ask Gibson about what he does to get out of his comfort zone, he just smiles at you mildly. “What’s the problem with going out? The worst thing that can happen is that you fall on your face. Just do it. You have to own it”.

You might know the saying ‘startups are like having a baby. When you have it, everyone congratulates you on the success but no one knows how often you have to get f***** on the way there.’ Babies, start-ups, career goals- it’s pretty much the case with every big goal. And often it’s about realizing the small truths, that can make all the difference in getting there. The truth for Gibson was that people kept telling him “there will be times when you will fail”. And as he shared, the best thing he could have ever done was to simply accept that, and go out there and do it. Own that you will fall on your face and the word is your oyster!

And then, when it actually happens, Gibson casually recommends “don’t beat yourself up too much, there are enough people already doing that for you.”

Why did I not think of that earlier?

As we talk and it seems that, at 62, he really has life and success figured out, one question that had made him really famous remained obligatory to ask: What is it, that women really want? (What Women Want, 2000)

“It’s somewhere between conversation and chocolate, but I haven’t gotten much closer than that still” he admits.

Since I had already taken so much life advice from him, I jokingly promised to figure that one out for him (and the world) as a quid pro quo until we meet again.

Now I too am on a big mission. But as I learned, it all comes down to four steps:

Take risks > Fall on your face > Own it > Repeat

Or simply: be more Braveheart. And it will be okay!