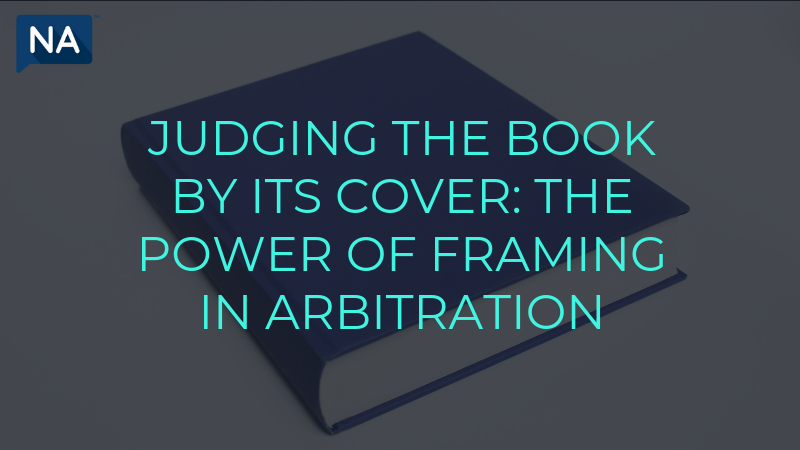 Despite the frequent claim of the opposite, most people I know end up judging books by their covers. Similarly, on a negotiation table, in a courtroom or in an arbitration, most people (including non-stakeholders) end up assessing risks based on the way they are portrayed. Just like smart authors have the power to persuade their prospective readers into buying their books, smart lawyers have the power to persuade the opposite party, the judge and the arbitrator of their solutions. This power lies in what we call “the framing effect”.

Amos Tversky & Daniel Kahneman conducted a famous experiment in 1981 to demonstrate how framing works.[1] Consider this: Before reading further, think of a plan you would choose from A and B and remember it. Which of the two plans would you choose from the two options of C and D?

Tversky and Kahneman found that in the first question 72% of the study participants opted for option A, whereas only 22 % opted for option C. If we look close enough, it is not difficult to deduce that the results of plan A and C are actually the same: In plan A, 200 out of 600 people are saved; in plan C, 400 out of 600 people die, that also means 200 are saved. Yet plan A is in a positive frame, it says “saves 200 lives” – so it got 72% of the votes. Plan C is in the negative frame “will let 400 people die”, so it only received 22%. Hence, the same outcome framed in a positive way gets 72% as opposed to only 22%, when framed negatively (see graph below). The framing effect is based on prospect theory which dictates human psychology to be risk-avoiding when presented with a gain frame and risk-seeking when presented with a loss frame. Most people would choose to avoid risk for a gain of 100$. The same people, however, will decide differently if they were told they had a 50% chance of losing 100$ if they refuse to take the risk.

How to Leverage the Power of Framing to Your Advantage?

By now it is obvious that how you frame a situation, solution or risk can have a huge impact on your client, the opposite party and the judge/arbitrator. But how impactful is it? And what effects does it have in different situations?

Consider an example where you have sued a competing company for an IP infringement that cost you 4 million USD in lost sales. The other side offers a settlement of 2.5 million USD. A loss frame counsel will say “if we accept this settlement offer we will lose 1.5 million”. What impact might this loss frame have on your client’s decision? They might hold out for trial! Risk seeking.

The win-frame counsel, on the other hand, would say “if we accept this settlement, that means we pocket 2.5 million for certain”. This will make your client risk-averse. They are most likely to accept the settlement. Of course, there is no guarantee that this is how it will play out – but there certainly is power in every frame!

This also brings us to why it is important to choose a lawyer carefully. A competitive lawyer who likes to play tough win-lose negotiations and for whom anything the other side gets always means a loss for themselves, will find their client’s behavior eventually turn out to be risk-seeking. If you have such a competitive lawyer on the other side, this loss-frame might cause risk-seeking behavior on their client, making it harder for you to convince them to settle. Your challenge is to spot when this is happening and frame them into a win-frame, “if you take this deal now, you walk away with a win of 2.5 million dollars, no more lawyers fee, no more court fee, no more wasted time, no more uncertainty.”

When does Framing Work in Arbitration?

The power of framing is often underrated. Most people believe that framing, at best, is a useful tactic that can be used to influence the opposite negotiation party, but think it is limited to only negotiations.

In another experiment, the effect of framing was witnessed in the arbitrators’ assessment of price on equitable principles.[2] There was a contract between 2 companies – Outsourcer and Service Provider, for IT-related services. The contract required a periodic price adjustment, but permitted pricing disputes to be resolved with arbitrators deciding ex aequo et bono.

Having presented the arbitrators with one of these two basic frames, they were asked two different questions requiring them to assess the dispute. First, a randomly assigned group of arbitrators was asked to make a price adjustment. A second randomly assigned group of arbitrators was then asked to evaluate the relative fairness of Outsourcer’s proposed price adjustment on a four-point scale (from “completely fair” to “very unfair”) which was later simplified to a two-point scale of “fair” and “unfair”.

This example also shows you that you cannot not use framing. It’s in all of your language. The skill is to make the subconscious conscious so you can be aware when you do it, how other people are doing it and what effect it can have on your, their and your client’s decisions.

PS: Take your negotiation skills to the next level. Check out our free Introduction to Negotiation course and sign up for the next Master Negotiator Course on www.necademy.com.